The world’s first marine plastics cleaning machine will be launched 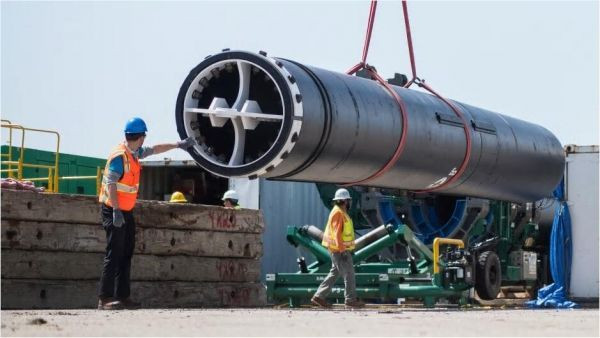 The world’s first marine plastics cleaning machine will be launched

According to a report on the British “Israel” website on April 22, this youth-originated system will be shipped to the “Great Pacific Garbage Belt” this summer. The Great Pacific Garbage Belt is located between Hawaii and California in the United States and contains a total of approximately 1.8 trillion plastics. It will be the first time since the discovery of the waste belt in 1997 that it was attempted.

Experts believe that this marine plastics cleaning machine should be able to collect half of the debris in the garbage belt within 5 years, with a total weight of about 40,000 tons.

Reported that in the past few weeks, they have been busy welding huge pipes together. These pipes will be placed on the surface of the sea to form the main body of the marine plastics cleaning machine, and it will become the largest floating barrier that humans have ever made.

Last month’s survey found that the area of the Great Pacific Garbage Belt reached 617,763 square miles (1 square mile or 2.59 square kilometers), more than twice the size of France, and contained at least 79,000 tons of plastic. It is mainly composed of “ghost fishing gear”, including components such as abandoned or lost fishing nets, ropes and other fishing gear, and most of these fishing gear come from illegal fishing vessels.

Scientific surveys have shown that ghost fishing gear kills more than 100,000 whales, dolphins and seals every year. As more and more seabirds and other marine life are found dead, the stomach is filled with small pieces of plastic.

According to the Plastics and Marine Foundation, which is based in the United States, more than 8 million tons of plastics are dumped into the global ocean every year.

According to reports, as many as 90% of plastic products in the world have never been recycled, and scientists believe that almost every piece of plastic produced is in some form somewhere, most of which enter landfills or Environment. Disposable plastic products, such as water bottles and diapers, take 450 years to degrade.

The system for handling the largest waste belt in the Pacific Ocean was designed by a non-profit technology company called The Ocean Cleanup founded by Dutch inventor Bojan Slater. He was still a 18-year-old aerospace engineering student.

Slater said: “What I really hope is that this century’s ocean cleanup can be a sign that we use technology to make the world a better place.”

Reported that this strange marine plastics cleaning machine consists of 40 feet (1 foot is about 0.3048 meters) long pipe – ironically, these pipes are also plastic, they will be linked together to form a serpentine long tube. The air-filled tubes will float in arcs over the surface of the sea, and the nylon screens suspended below will form a giant buoy that catches plastic waste that collects as the water moves. However, these screens are unable to capture plastic particles – extremely tiny debris. Fish can swim under the screen and will not be caught by them.

The “Marine Clearing” company team plans to launch this system from the San Francisco Bay Area coastline in a matter of weeks, begin work between the end of July and continue to expand the work area.

They plan to place 60 giant buoys, each with a span of 1 mile (approximately 1.6 kilometers), and then dispatch ships every six to eight weeks to collect the captured plastic debris.

16-year-old Slater also went diving in Greece while attending school. For the first time, she saw with her own eyes the amount of plastic waste that polluted the sea. He recalls: “The plastic bag there was more than the fish below.” Two years later, he proposed a solution and he dropped back after six months to create the “Marine Cleanup” company.

According to the report, the company raised 1.57 million pounds (a pound was about 1.4 US dollars) through crowdfunding activities. The subsequent investment resulted in a total funding of 28.56 million pounds. Now the company has 65 employees, including researchers and engineers.

Slater, 23, said that the first piece of plastic that was sent ashore would be an important milestone.

He said: “As humans, we have created this problem, so I think we also have a responsibility to help solve this problem.”

Slater told reporters on the website of the American Fast Company magazine: “Most plastic waste is still large, which means that if we don’t clear them out in the next few decades, the number of plastic particles may reach 10 times today. 100 times.”